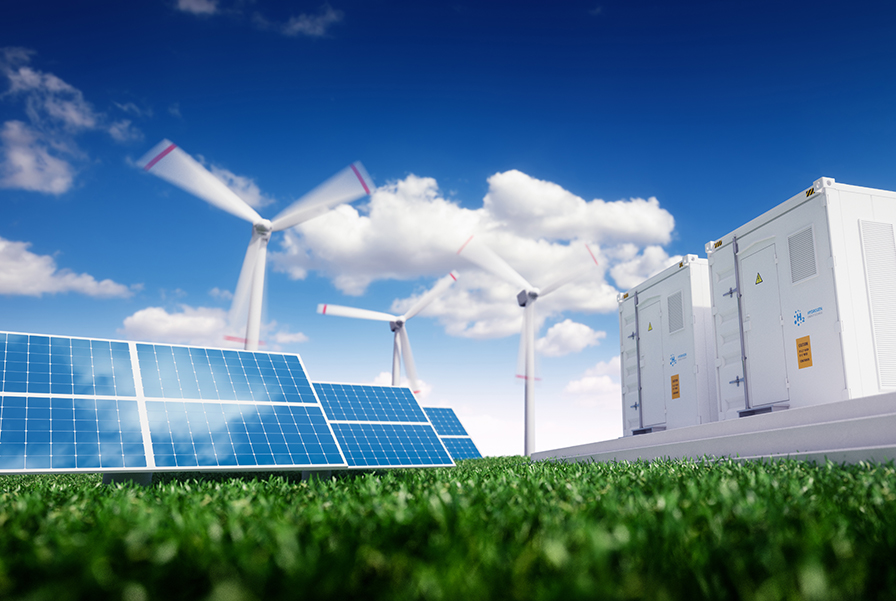 Global warming. Temperature increase. Political agendas. Enough said. Everybody is aware of the topic. But, what does global warming, and expected quality of life mean for an electrical engineer? Most likely the most fun and challenging decades ever. Nobody wants to give up the living standard that we have worked so hard for, and society and industry are now so dependent on a high-performance mains supply that any failure of the grid to supply power is regarded as a crisis.

One of the main contributors to greenhouse gases is emissions from coal and gas power plants in the traditional electricity network shown in Figure 1. 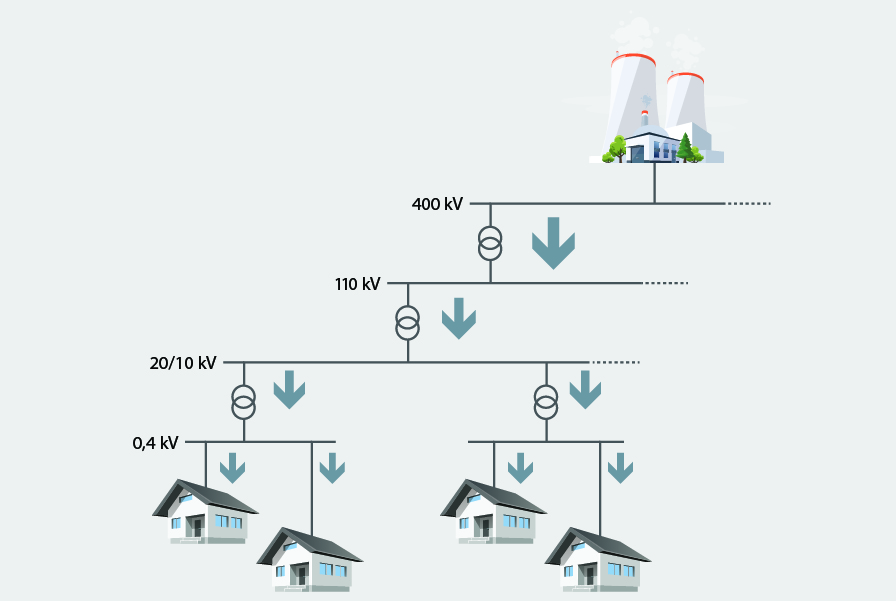 After the incident in Fukushima, society is approaching nuclear power with more caution, despite its being a non-CO2 emission technology. The energy sector will change, and that will influence the working day for thousands of engineers. We will harvest new sources, start to store energy and bring the energy to where we are. By doing our part of the deal we can one day leave the planet in good shape: creating a sustainable future for our children and grandchildren.

Thankfully, this is already happening, right now. For example, in one region in India there is currently installed 12.3 GW of renewable energy, in Denmark 7.8 GW and in Netherlands 7.7 GW. In California they recently peaked at 10.5 GW renewable production, whereas the global climb rate is 8-9% annually. But still, renewables are currently a minor player in terms of network capacities and society is still reliant on fossil-fuel-based power plants. Firstly, wind and sun are not necessarily available when the consumer needs the energy. Second, large rotating masses in large power plants provide stability to the grid. Therefore, renewable energy production may be cut back in periods, in order to deal with grid challenges, congestion management and balancing cost.

The effect of energy storage in grids is continuously being demonstrated, and records are being set in the scale of installations. Some good examples are operating in California and Australia. There seems to be consensus that energy storage can make the grid more flexible, allowing more renewable content. Discussions are rather to what extent.

The future of energy storage

In most cases energy storage takes the form of batteries, but it can also be realized in other forms, for example elevated water (pumped storage). We see batteries introduced in largescale grid installations, private electric vehicles, plug-in hybrids, larger marine vessels, trucks, and cell-phones, just to name a few applications. Energy storage provides us with the flexibility to use energy at a time and location where it is not produced, at small and large scale. We can assume that by combining traditional energy generation with renewable and energy storage we can fulfil our dream of leaving the legacy of a greener and cleaner world for our coming generations. Various technological solutions for energy storage are being investigated in China by governmental initiative. Li-ion technology may not be the only answer. For example, if using Li-ion batteries to cover all renewable power fluctuations in California, the cost is estimated to USD 2.5 trillion. At the same time China is a major player, establishing the majority of global battery factories. This will most likely reduce Li-ion prices and make the transition to renewable sources easier. But, there is also a fear that this will make it harder for other technologies to evolve due to “lock-in” of technology.

Technology will however not be the only factor driving the decisions. Politics and price will as well. Natural resources used in battery manufacture, or batteries themselves, might even become “the new oil”. The topics are already on the world agenda and debates over resources have already started. Both lithium and cobalt resources are increasingly under Chinese control. On the other hand, battery manufacturers are striving to reduce use of controversial minerals such as cobalt. In any case, the amount of energy storage needed is anyway so huge that we must improve storage technologies in terms of density, cost and safety to fit our dream of a re-structured new grid. Replacing massive size power plants with hundreds and thousands of smaller energy sources may demand a full restructure of national power grids. Utility companies in Germany have been struggling for some time already, to cope with the change of energy resources, transmission capacity issues and recent development of end customer expectations of flexibility and smart homes. We will also most likely see the introduction of big-data and more analytics for most efficient operation of the network.

My belief is that there is so much money invested in the traditional nationwide AC-grids, that we will continue to use those for several decades. Lithium-ion batteries are low voltage equipment (<1500 V), and it seems to be a nice fit for small and medium sized communities where the power is low enough to use low voltage equipment.

Multiple households, communities or factories may have a common distribution system, where consumers and sources are all connected with energy storage in an AC-grid or a DC-grid as illustrated in Figure 2. 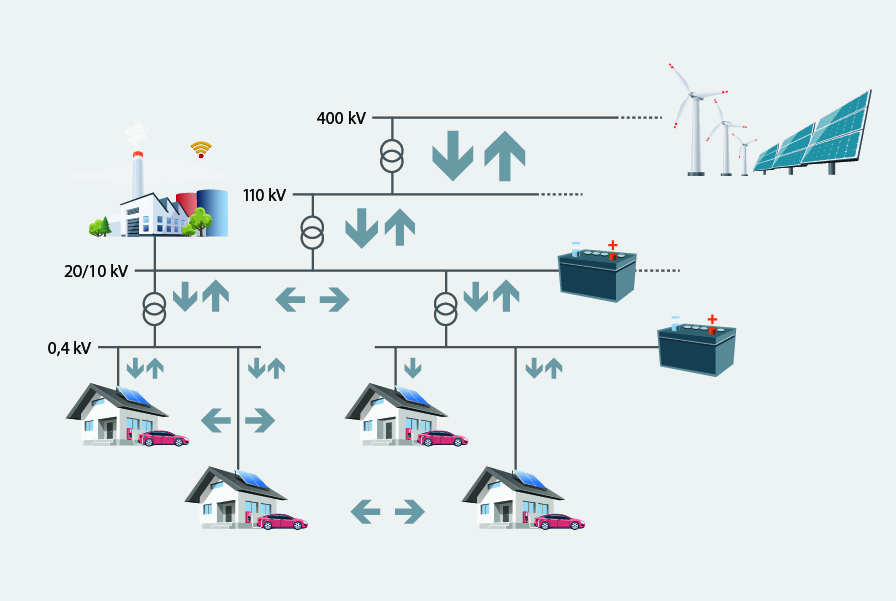 Figure 2: Example of AC distribution, where local energy production and storage is implemented in existing AC-grid.

In contrast to the nationwide grid, electricity supply and transmission in a local community could comprise a pure DC-grid, illustrated in more detail in Figure 3. 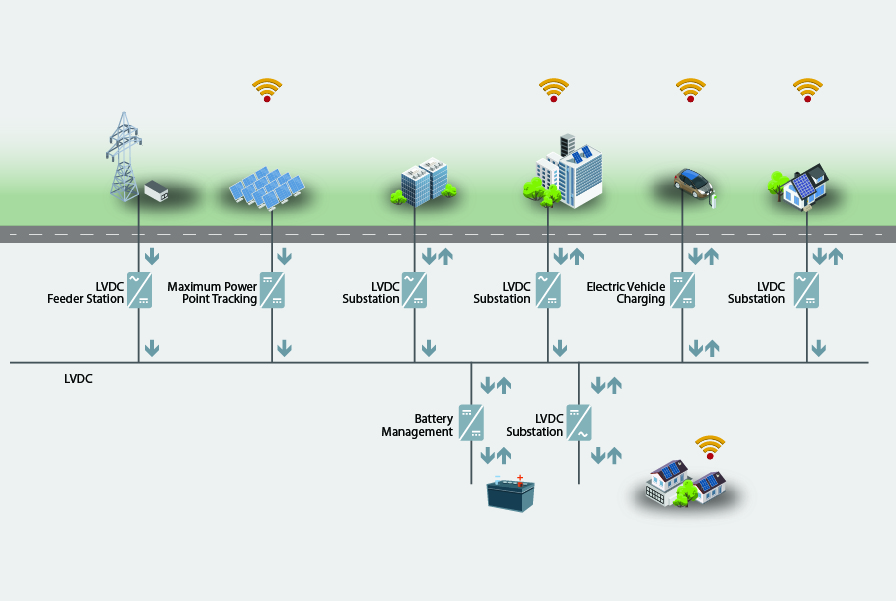 Energy produced locally should be used locally, at same time introducing island-mode and extra redundancy, making CO2-free communities a viable option. This will put less strain on future upgrades of the nationwide transmissions systems, as only the average power requirement is consumed from the grid and the peak power requirement is no longer valid.

Danfoss is taking an active part in the hybridization of marine vessels, land-based energy storage, and energy storage in industrial applications. We are developing the tools needed for energy flow, load-levelling and safe operation for next generation grids focusing on a sustainable future.